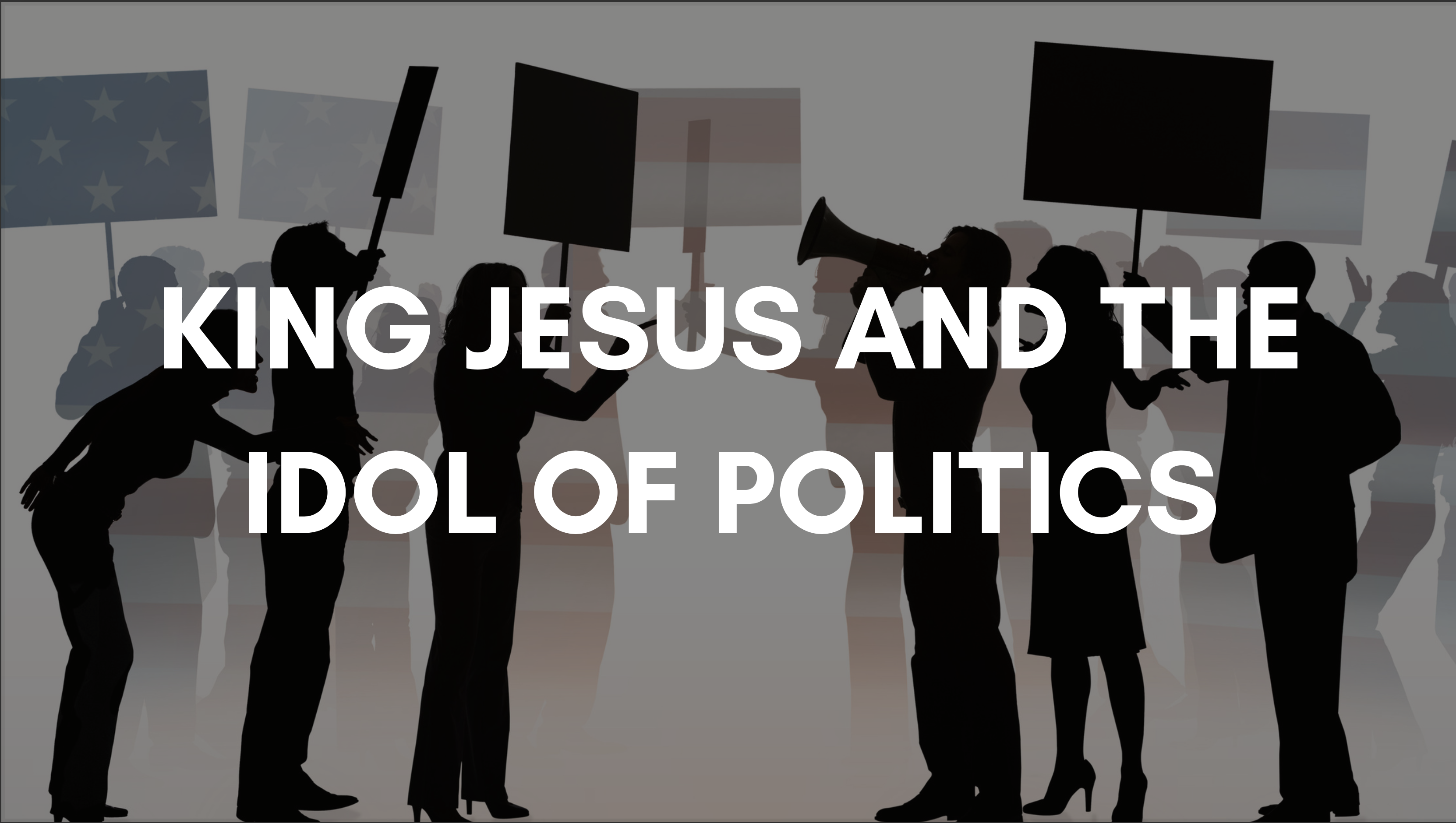 I think I realized I might have a problem when the producer of a well-known show on MSNBC left a voicemail for our church trying to get me on the show that night.

In 2016 I never would have said that I was too political, or that politics was an idol for me, or that politics had too great a place in my mind and heart. But that phone call, and what it brought out of me, changed my mind.

Here’s what happened: In 2016, I really enjoyed following political news. At first, I loved the rhetoric and the strategy. Gradually, political news took up more and more of my internet time after work. I started to have a lot more opinions about policies as I saw the relative merits or problems with various positions. I began to get invested in specific candidates. But I didn’t think it should be any concern.

Then in the primaries, a particular candidate made several statements that angered me. Before I knew it, I wrote a fiery blog post against the candidate and posted it. A reporter retweeted it, leading to a request from a media outlet to republish it. I didn’t think it was a real problem. This time the republished article led to the call from an MSNBC producer. At the moment I got word of the voicemail, a question occurred to me that I hadn’t been asking:

“What do I want to define me?”

Defined by Devotion to Christ

This isn’t a new struggle or issue. One of the 12 disciples of Jesus was broadly known for his political affiliation, so that it became part of his name and identity: Simon the Zealot. Three of the gospels use this designation for Simon (Matt. 10:4, Mark 3:18, Luke 6:15). It is a debated point among scholars, but I agree with R.T. France, Darrell Bock, and others who say the designation is likely due to Simon’s nationalist political leanings and his zeal for Jewish independence from Rome. The Zealots would later emerge as a formal political party, a group of activists seeking to overthrow the Roman government, who often resorted to violence.

This is why Simon’s trajectory in the gospels is fascinating: He was part of a cause that required him to be “all-in.” And it would be hard to argue that the cause wasn’t worthy on some level. Was it right for Rome to oppress people by implementing an unjust and exploitative tax system, and to brutally enforce the whims of a pagan emperor after God had given that land to the Jewish people?

But Simon’s life radically changed when he met Jesus. He followed Jesus 24/7, listening to his teaching, imitating him, and learning from him. He became Simon the Christ-follower. The defining characteristic in his life was his relationship to Christ, not to politics.

In my own story, I had not been careful enough in my heart to make sure Christ had a place of absolute rulership. I could confess with my mouth, but more often, my heart and emotions were moved by things in the world of politics, than by Christ.

Now, hear me on this: It is appropriate for Christians to care about politics. We should pray for our nation’s leaders, desire a government to function The defining characteristic in his life was his relationship to Christ, not to politics. 4 4 4 5 as God intends, seek to be good citizens, and work toward justice and the common good as we have the opportunity. Some Christians are called to hold political offices or work for the government in other ways, and we should thank God for them. So I’m not saying a Christian can’t write a political op-ed, although hopefully after prayer and counsel, and pastors especially, need to avoid taking public political positions that alienate those to whom we are to proclaim the gospel. I’m saying that the experience of writing my own op-ed revealed that in my heart, the place Christ should hold was slowly being ceded to political concerns.

Ultimately I decided that I couldn’t pursue a hobby of political news and posts and keep my heart entirely devoted to Christ. I feared that ultimately I would be defined by one more than the other. I feared that it was easy for politics to replace Christ as the controlling influence on my life in my own heart.

Alongside Simon in the group of twelve disciples was Matthew the Tax Collector. It would be difficult to find two more politically and naturally opposed people in Judea. Zealots were feared for wanting to overthrow an unjust Roman government, while tax collectors were despised for collaborating with the Roman government. These two men lived and ministered and worked alongside each other. But how?

Christians should feel a far greater sense of identification with each member of our church family, whatever their politics may be, than we do with those who share our politics but not our savior. And it is only when we treasure Christ above politics that we can genuinely love, honor, and enjoy those with different politics.

This is crucial in my own context. In El Paso, there are two major political defaults in my city: the average longtime El Pasoans who default to be liberal, and the military service members and federal employees who default to be conservative (though there are undoubtedly many exceptions), and a 4 4 4 5 large number of Mexican nationals thrown in for good measure. How can people whose parents never voted Republican be united in heart and mind with people whose parents never voted Democrat and with people born in another country altogether? It is only when they are united by a King whose rule and reign transcend all those labels.

I realized that I was in danger of elevating political concerns in my own life to the point that someone must share my political perspective to be relationally close to me. And by being most known for a political opinion, I ran the risk of cutting off the relationship before it even began. When Christ is most clearly and loudly where our allegiance lies, it allows us to form relationships beyond those of political affinity.

A Different Sort of Revolution

In Acts 1, after Jesus ascends, Simon is mentioned again. On the day of Pentecost, he was also there, after the Spirit falls: “But Peter, standing with the eleven, lifted up his voice and addressed them: ‘Men of Judea and all who dwell in Jerusalem, let this be known to you, and give ear to my words” (Acts 2:14). Perhaps some in the crowd even knew Simon before as a passionate apologist for political revolution. But after Christ, he’s proclaiming a different sort of revolution. With Simon next to him, Peter proclaims: “Let all the house of Israel therefore know for certain that God has made him both Lord and Christ, this Jesus whom you crucified” (Acts 2:36). In Acts 5, Simon is with “all the apostles” (verse 12) who, after being imprisoned, proclaim a new Leader and Savior whom God has exalted.

Simon had spent his old life trying to get a new king or ruler on the throne, but he now proclaims a new king is already on the throne of heaven. He, along with the other apostles, spend themselves, risk themselves, and devote themselves to the building of the church and proclamation of the gospel above all else.

In our own lives and situations, we can hold political opinions on the best candidates or the best policies, but our life mission as Christians is something much bigger. Our mission is redefined, and stewardship of our lives reprioritizes the proclamation of Jesus as King, even over the noble goals of seeking good political leaders.

This means that we must get used to building relationships, doing good, and sharing the gospel across political lines. We don’t get to first ask someone’s political leanings before we share the gospel. No, we freely share the good news that Jesus is Lord. That’s the only way to reach the city.

The King of Kings in our Heart of Hearts

Political idolatry is a tricky thing to spot. It’s possible for someone working on a congressional campaign to be living firmly with Christ at the forefront of their heart as they do good and tell others, even their political opponents, about the better rule of Jesus. It’s also possible for someone to never speak a political word to someone else in their small group but hold politics as an idol as they drive home listening to talk radio or political podcasts.

How can we identify political idolatry in our lives?

I didn’t end up on MSNBC as a political talking head, and I’m grateful for that. But it still pains me that perhaps the most widely-read thing I’ve ever written is about a candidate in the 2016 primaries. The last thing I want is to be known as Ricky, the Political Commentator.

But I have no control over what ultimately defines me in the view of others. I have control over who reigns in my heart and where I invest my time, energy, and worship. And what I should care about most is how the Lord sees me.

To that end, I hope to imitate Simon the Zealot. I wonder if perhaps years after Pentecost, he would smile when people would ask him about his old political life: “Weren’t you the guy zealous for getting a new king on the throne of Israel?”

Perhaps he would reply: “Oh yes, friend, in fact, he’s already on the throne. Let me tell you the good news about him ….”