God at Work in the Broken City 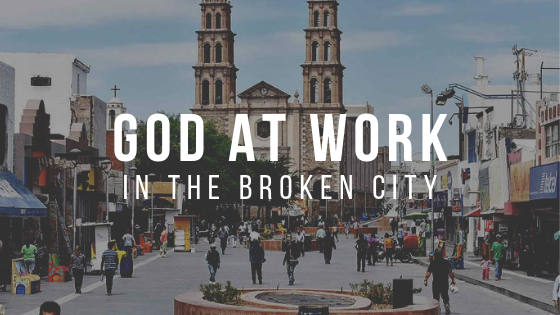 Pastoral resident Andres Contreras shares lessons his church, Gracia Soberana, learned during the worst period of violence in Juarez. He encourages us that God can and does work even through hard times to build his church and reach the lost. In El Paso we need this example and encouragement in light of what has happened in our own city. Let's be encouraged by the example of our Mexican brothers and sisters -Ricky

Two weeks ago, just a couple of days before our official move-in day into El Paso, we were shocked to hear the sad news about the shooter that came into the Walmart to shoot against those who are from my own culture, or speak my language. That day, confusion, fear and anger came rushing into my heart and the heart of my wife -as I imagine happened to you as well.

Yet, in the midst of all the struggles going on in our hearts, the Lord reminded us of three important lessons he had already taught us a few years back.

As you know, between 2008 and 2011, my hometown, Ciudad Juárez became the center of a war between two cartels, breaking havoc all over our city. It was during this time that Juárez became known as the most dangerous city in the whole world.

In a time period so marked by insecurity, violence, fear and uncertainty, the Lord taught our church three important lessons.

One of the biggest problems that the war between cartels brought to our city was that hundreds of innocent people was affected because of the crossfire. We never knew when a shooting could start in the middle of the street, or if a bullet could come flying through a window. There was nothing we could do to defend ourselves, nor our families. We couldn’t fight back, no strategy seemed enough to help us feel “safe” again in our city...it was a time of chaos, and uncertainty. However, we had to face the reality that we needed to continue to live our lives, we still needed to go to work, study, or go to the store. How could we go out with everything that was going on? How could we be assured that we would be able to return home safe?

In the middle of our fight against fear, we learned to turn upward before heading out. The uncertainty of what could happen outside led us to find our source of security not on what we could do to protect ourselves but on him who holds everything by the word of his power. Week after week we heard many testimonies of how the Lord miraculously saved people from adverse circumstances. When we couldn’t defend ourselves, God proved to be our only stronghold and safe refuge.

2). The Lord is still good even in the midst of pain and suffering.

During the first year of the war, we were amazed at the amount of testimonies that we received regarding how the Lord had protected certain members from the church. However, everything changed during the second year of the war. We started to experience the loss of dear church members, pain and suffering because of the war.

While the first year of the war was marked with thanksgiving and rejoicing for God’s protection, during the second year we started to experience doubts. Was God still with us? Did this war get out of His hands? Why was He allowing us, his church, to suffer this way?

In the midst of all our questions and heartbreaks, the Lord reminded us that he was still good, even when life hurts. When doubts of God’s goodness came our way, the Lord reminded us that He has already shown his goodness towards us in the person and work of Christ. Romans 8:32 became so sweet during this time: “He who did not spare his own Son but gave him up for us all, how will he not also with him graciously give us all things?”

How could we doubt the goodness of the God who had given his only Son for us, who came and bore our sins upon his shoulders as he hung on that cross, and who was resurrected for our justification? The cross of our Savior became the anchor for our souls when the waves of doubts and fears came crashing into our hearts.

One of the most remarkable things was that the people from the church that had experienced the most serious loss, the loss of a dear one because of the war, were giving testimony to God’s nearness towards them even in the midst of their grief. They were the ones encouraging us to realize the God had not abandoned us; rather He was still near and active! In the midst of heartbreak, pain, and suffering God, our Father is still good.

3). The Lord can use hardships to glorify his name and build up his church.

The season of the war gave us a unique opportunity to serve our city. As a church, we went out and sought to bless our city in practical ways. We began with offering to pray for people in the middle of the street. I’m still amazed  at the amount of people that stopped for a few minutes to tell us a little bit of their need, allow us to pray for them, and listen carefully as we preached the gospel of Jesus Christ to them, before they returned to their daily routine.

The Lord also granted us the opportunity to host a meeting in our church for a different branch of the police each month. Church members would bake them pastries for them and their families, and a pastor would preach the gospel to them. In the course of a year we were able to thank personally each policeman for their courage in the midst of such dangerous times.

Through these events and similar ones we saw the Lord give us opportunities to proclaim to a suffering community the hope of the good news of Jesus Christ. We had a tangible opportunity to show to our city that our hope is not found in something that can be taken away from us, rather our hope is built upon an unshakable solid rock, the Lord Jesus Christ.

The Lord was still at work. He was using our church to proclaim his gospel and see people come to know and love him. God had not abandoned us, nor inactive. Rather, he was still building his church.

Church, in the midst of our mourning for our city, let’s not forget that the Lord is still at work. God can use this time of grief and confusion to bring people closer to him. There are countless opportunities to go out and tell this city the hope that we have in Christ. We can go boldly, in the assurance that our good God is our stronghold and a very present help.